On March 29th, MLP Spanish Instructors José Cruz and Ervin Ostos attended the workshop organized by Cervantes Institute: “The use of digital linguistic resources of Spanish as a foreign language”, presented by Daniel Cassany.

Considering the profile of Spanish students in Turkey, the aim of the workshop was to present online resources for teaching reading, writing, and speaking skills as well as interculturality. The emphasis was on linguistic resources and education using technological devices as mobile phones, tablets and laptops.

Daniel Cassany is a Discourse Analysis teacher and researcher, at the Department of Translation and Philology (Universitat Pompeu Fabra). He has a degree on Catalan Philology and a Ph. D. on Educational Sciences. He has published more than 12 books about written communication and language teaching in Catalan, Spanish and Portuguese, and also more than 90 texts, between scientific articles in bulletins and reviews, also in English and French. He has been visiting professor in postgraduate courses, masters and Ph D. programs at universities and institutions of more than 25 countries, in Europe, America and Asia. From 2004, he coordinates a research group about Critical Literacy. Personal web: http://www.upf.edu/pdi/dtf/daniel_cassany/ 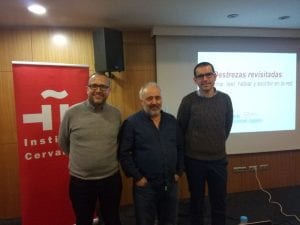 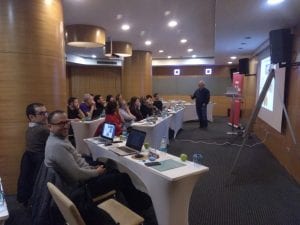