Reflecting on “Why Won’t the Little Beasts Behave?” by PETER MEDGYES 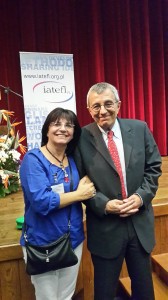 On 13th September I was so glad that I could find a seat for Peter Medgyes’ plenary at the IATEFL POLAND Conference. I had planned the day before to attend his session because I was sure that he would make my day. And guess what? He really made my day because he made the whole audience laugh and keep their attention active for one hour.

Motto: “It is a war out there, and we need to use every single weapon we have at our disposal.” by Sue Cowley

Professor Medgyes, who is aldso the President of IATEFL started his plenary by saying:

“I’d like to announce that this lecture addresses only those colleagues in the audience who often have discipline problems. So may I ask the lucky ones who have never experienced the humiliation caused by rowdy pupils to stand up please and leave the lecture room? I’m sorry, but you’ve come to the wrong place…”

“..I can’t see anybody leaving. Am I right in thinking then that you’re fellow-sufferers?Great! Welcome to the club – and thanks for your honesty”.

The reason why people keep quiet about their discipline problems is because they think they’ll be regarded as a bad teacher. Throughout his lecture Peter read out some diaries of teachers who had discipline problems. But the way he read those entries was so funny that people made people laugh rather than feel bad for those teachers.

Some of the diaries that he read out to give us a taste of their feelings were:

“My only weapon is punishment I can’t make them work unless I threaten them with a test which they’ll have to do next lesson.”

“To be honest, during these months I decided to throw in the towel at least three times because I felt so disappointed. Nevertheless, I decided to stay because I thought giving up would mean that I was ill-suited for this job.”

“They’ll get loads of homework”

“I am going to murder Christopher”

“She keeps yawning in my face. How dare she?”

After he read out some of the diaries, he added that teachers need to understand the nature of the problem first before they can deal with it. He compared our jobs to a doctor’s job by saying:

“When a doctor does not know what the problem of the child is, he diagnosis it as stomach ache”

He also emphasized the fact that language teaching methodology books and journal articles get written by non-experts. They may well be experts in some other field of study, but not in classroom teaching. They don’t have chalk on their faces. The next part of the lecture focused on types of teachers. He started by saying: “a teacher has to have a strong personality, so that pupils will not take any advantage of it”.

“A teacher who cannot maintain control is regarded as a threat to the good order of the school” (Hoyle, 1969. P.43)

Those who can need no advice. Those who can’t had better keep quiet about their ineffectiveness. 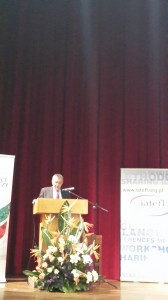 What are Some Features of the Disciplined Classroom?

3.  The teacher is in control.

4.  The teacher and students are cooperating smoothly.

6.  The lesson is proceeding according to plan.

7.  The teacher and students are focused on the same objective.

Ur assumed that each of these features fosters classroom discipline, but in varying degrees.

In this part of the lecture Medgyes talked about teachers who are capable of imposing order. Who are these wizards? In her book “Getting the buggers to behave”, Sue Cowley (2001) conducted a survey among school pupils. Pupils said that teachers who are able to keep control in the classroom fall into two categories. One category is the ‘strict and scary’ teacher. Her attributes can be summarised like this:

The strict and scary teacher:

At the other end of the scale, there’s the ‘soft and shaky’ teacher, who is unable to control the class.

The last part of the lecture focused on the question:  What leads to misbehaviour? The causes are manifold. The three types of causes: external, pupil-specific and teacher-specific. And finally he focused on how teachers can prevent disorder?

He concluded his session by emphasizing the buzz-word of today: Becoming a REFLECTIVE TEACHER.

We all have 3 things to learn:

In other words, behave like a teacher. Be strict and scary. Alternatively, be firm but fun. But for God’s sake don’t be soft and shaky!

« Icebreakers: What’s Your Favorite?
“I think, I feel, I learn”: Reflections on the session by George Kokolas »