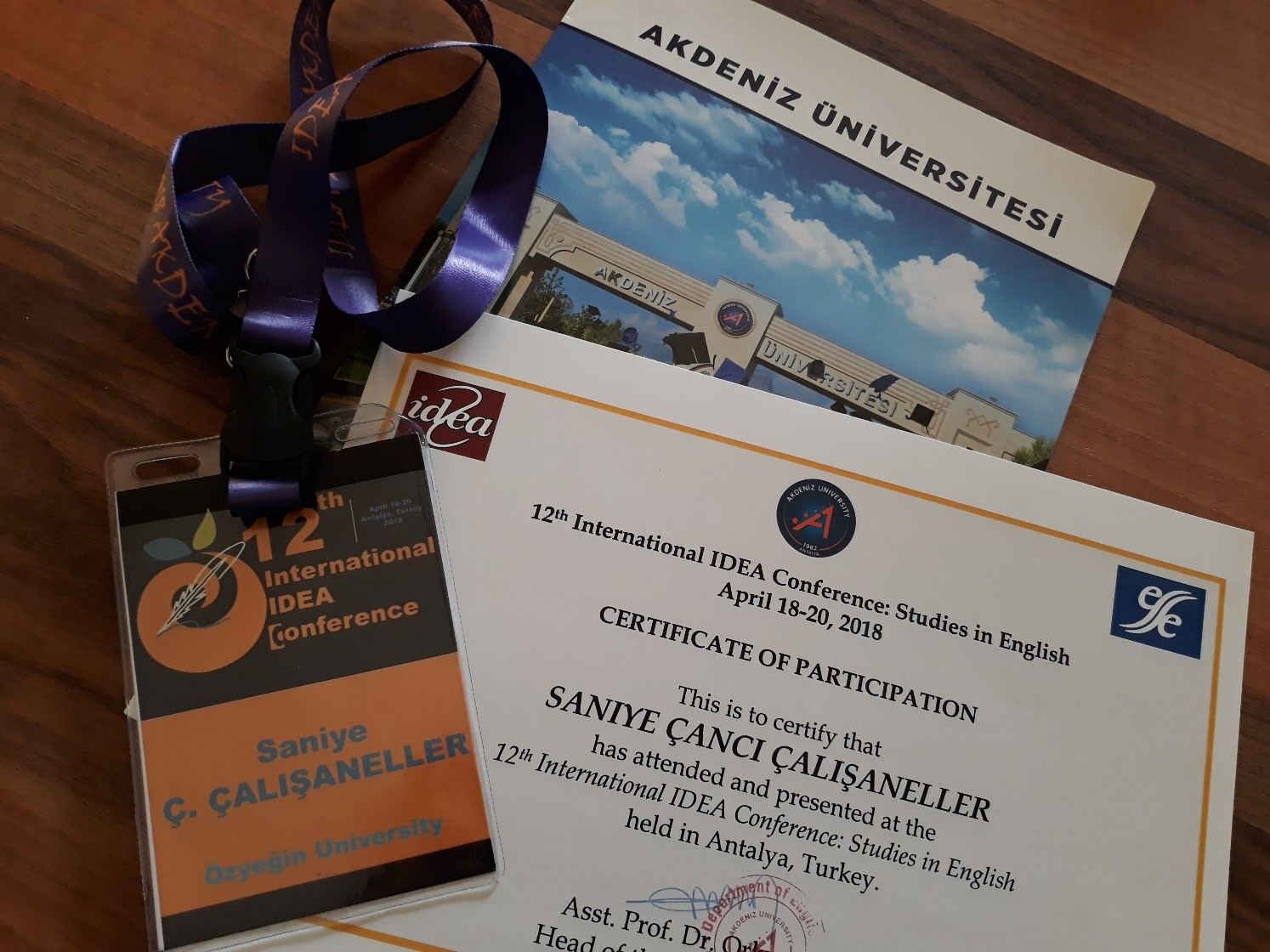 a. Brief information about the conference :
The conference was held on April 18-20, 2018, at Akdeniz University in Antalya and included a wide range of presentations in English and American Studies, British and Cultural Comparative Studies, Translation Studies, and ELT.

b. Brief information about my presentation:
Abstract of my presentation:
Written by American writer Gore Vidal, Hollywood (1990) is one of the seven novels known as The American Chronicle or Narratives of Empire, a series that provides an alternative narrative to official American history. The novel focuses on the body politics and political actors between the years 1917 and 1923 and is concerned with the representation of reality. Vidal is very much aware of the constructed nature of history and particularly “skeptical of official versions” of it because, as he remarks in an interview entitled “Truer Than History” published in The New York Times Book Review, “The official narrator always has one story to tell and, often, a story to suppress” (McGrath 15). In line with this perspective, he re-contextualizes the relationship between Washington D.C. and Hollywood to depict the power relations in shaping the representation of reality. In the novel, Vidal makes use of Hollywood movies as a medium to question how reality is fabricated by certain power structures. In this context, Hollywood revolves around the fact that American film industry is manipulated by the Wilson administration to promote its ideology. Hence, this paper will attempt to unearth how the movie sector is employed to shape the reality outside it by analyzing the ways in which Vidal identifies Washington as a political actor fed by the fantasy world of Hollywood, which could in return affect the course of history.

c. “Highlights from Conference”
The three-day conference included concurrent sessions about Medieval Literature, British Drama, Comparative Literature, Poetry, Translation, Canadian Literature, Shakespeare, Animal Studies, American Popular Culture, 18th & 19th Century Literature, Victorian Period, Drama, Irish Literature, British Novel, American Novel, Postcolonial Literature, Romantics, Gender and Literature, Renaissance Literature, Chaucer, War Poetry, Non-fiction, Welsh Literature, Media Studies, Travel Literature, Science Fiction & Fantasy, ELT, and Linguistics.
I was able to attend the second and the third day of the conference due to my schedule in ScOLa overlapping the first day of the organization. I had to choose some of these concurrent sessions throughout the conference and the ones I picked gave me insight into different areas. Hence, I found the chance to learn about Travel Literature while the presenters explored different travel accounts and visuals. I also had the opportunity to think about the ways in which deconstruction of gender identity works in American Fiction. I was very lucky to follow a session about Postcolonial Literature where hybrid identities were discussed in relation to personal and political history of nations. The session about Utopian-Dystopian Literature provided me with different perspectives about the field and how it has been perceived and interpreted. The session where the presenters focused on the 19th century literary pieces contributed to my knowledge about women’s struggle with patriarchy in the Victorian Age. I was also able to attend a session where I gained better understanding of traditional detective fiction. As for my presentation, I delivered my speech on the second day of the conference and it became a very nice session followed particularly by a group of young audience. All in all, it was a very fruitful conference for me.